The collections in this guide are a unique corpus of material providing first-hand evidence of the fight to gain scientific acceptance of the lethal effects of exposure to asbestos and to get compensation for the victims of asbestos-related disease. Asbestos production had always been dominated by a handful of companies which exercised worldwide control over scientific research into asbestos and prevented access to their own company records. A notable feature of the material is the inclusion in three separate collections of copies of the corporate archives of Turner & Newall (T&N), one of the world’s leading asbestos manufacturers. T&N had never allowed access to its archives but was obliged to allow them to be inspected and copied by lawyers as part of a lawsuit initiated against the company in 1987 by Chase Manhattan Bank in the US. The copies reveal at first-hand when and what T&N knew about the dangers of asbestos and how it handled the health of its employees. An equally notable feature of our collections is the presence of the voices of the victims of asbestos-related disease. Particularly poignant are the oral history interviews with victims and their families.

This guide was written by Michael Canning, history masters student at the University of Strathclyde, 2019-2020.

Named after the husband of Nancy Tait, this archive tells the tale of the world’s first anti-asbestos action group. Following the death of her husband from a ‘puzzling illness’ and the refusal of the asbestos industry to admit fault, Tait was spurned into researching and publicising the dangers of asbestos. By 1976 she had become a thorn in the industry’s side with the publication of the sensational pamphlet, Asbestos Kills. The backlash from the asbestos industry convinced Tait to establish a charity, initially called the Society for the Prevention of Asbestosis and Industrial Diseases (SPAID) but later renamed the Occupational and Environmental Diseases Association (OEDA), to help bring together the anti-asbestos campaigners.

This archive contains a lifetime’s work from Tait, from her initial research to the internal documents of the charity itself. It shows how the anti-asbestos campaign evolved over the years from seeking a media presence and publicising cases, to undertaking its own valuable medical research – OEDA was able to boast of its own electron microscope laboratory within a decade. Much of the archive is devoted to the charity’s correspondence with MPs, doctors, lawyers and asbestos victims alike, illustrating how the charity remained close to Tait’s aims of both raising awareness and supporting anyone who needed their help.

These papers are copies of documents from the corporate archives of Britain’s leading asbestos manufacturer, Turner & Newall (T&N). Throughout the 1980s, the company had come under increasing legal pressure from American lawsuits. It was in 1991 that Chase Manhattan Bank won a significant discovery ruling to access all of T&N’s internal documents. Their team, led by Michael O’Connor, came across a vast wealth of documents which revealed the extent to which T&N had known about the dangers of asbestos.

This collection is one set of copies of these documents which O’Connor gave to Nancy Tait. As a resource for business history, it details the rise of T&N through the company’s own archives. It also shows how T&N responded to rising health concerns, from undertaking its own medical research, handling incoming regulations, and the suppression of damaging reports. There are also papers revolving around the legal case between Chase Manhattan Bank and T&N which led to the discovery of these same documents.

Another set of copies from the corporate archives of Turner & Newall, distributed by Michael O’Connor of Chase Manhattan Bank after the Bank’s lawsuit against T&N. The copies were owned by Clydeside Action on Asbestos and used as a research resource.

Geoffrey Tweedale is a business historian with a long-standing interest in the history of occupational health, particularly asbestos-related disease. These are the papers he gathered during the course of his research for his book 'Magic mineral to killer dust: Turner & Newall and the asbestos hazard' (2nd edition, 2001: Oxford University Press), which investigated the British company, Turner & Newall, one of the world's leading asbestos manufacturers. The bulk of the papers are copies of papers from the Turner & Newall corporate archives. However, there is also material from other sources as well as Tweedale’s own notes and correspondence.

Originally a chemist in the pharmaceutical industry, Alan Dalton went on to join the British Society for Social Responsibility in Science (BSSRS) as a passionate safety and environmental campaigner. Within five years, he had achieved notoriety for the 1979 publication of his book, Asbestos: Killer Dust. It became a key resource for workers, although its charges brought about a libel case against Dalton by Dr. Robert Murray. The legal battle went on to financially cripple the BSSRS, demonstrating the financial risks involved for anti-asbestos campaigners.

Dalton’s activism continued in the following years despite this setback, with his papers representing decades of work. His library includes a collection of his own published material, and the books and academic reports he collected to inform his research. Materials from his time working with the BSSRS and the Transport & General Workers Union reveal how organised labour responded to the growing health crisis. The media coverage of the asbestos crisis is also featured, including several documentaries with Dalton’s own contribution. Correspondence with fellow activists and support groups also portray the grassroots nature of the anti-asbestos campaign. 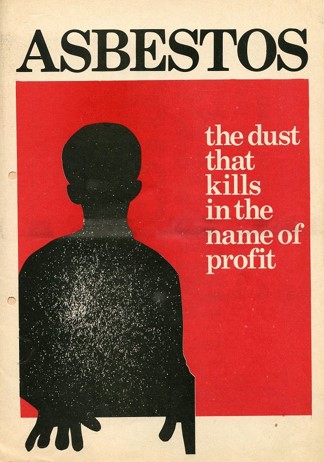 Laurie Flynn is an investigative journalist who began his foray into the dangers of asbestos by writing about the Scottish lagging industry. It was in 1979 that he became a researcher for the World In Action team. His investigations took on an international character as he uncovered the extent to which employees suffered in the mines and factories abroad. In the following years, he went on to produce documentaries about the abuses of the asbestos industry in countries such as South Africa and India.

The Flynn papers provide a valuable insight into the asbestos industry, both inside and outside Britain. Much of his collection is focused upon South Africa in particular, ranging from documentary scripts, correspondence with doctors and lawyers, and press documentation. His contacts with American lawyers also allowed him to make use of their generous discovery process to obtain a large collection of internal industry documents, as well as an overview of legal cases throughout the 1980s-90s. [Image right: FLYNN/3/1]

Enjoying the backing of the Scottish TUC, the Cancer Prevention Society was established in 1979 by former factory inspector Ted Rushworth, anti-asbestos campaigner Nancy Tait, and Scottish National MP Margaret McBain. With such a high profile from birth, the charity sought to prevent cancers of all kinds by raising awareness and acting as a pressure group to ensure safer conditions throughout Scotland’s schools, workplaces, and more.

The charity’s foundation and its subsequent activism is covered in detail within its press archives, much of which was devoted to its campaigning. The charity launched multiple investigations of its own, reaching out to schools and universities which had been affected by asbestos. The collection also features the charity’s informational publications on thirteen different types of cancers as well as the research and scientific papers that went into producing them. Covering how cancers could be prevented and how to make their victims’ lives easier, the medical literature is an example of how the charity pushed for public awareness.

Although the first workplace regulations on the asbestos factories had been instituted in 1931, they were limited in scope and became relaxed after lobbying from the industry. It was not until 1969 - nearly four decades later - that a new set of serious regulations became law. One of the biggest consequences was that factories were forced to limit the concentration of asbestos dust in the air. As a safety officer at the Warren Spring Laboratory, M. J. Sanders was one of the people responsible for evaluating just how these changes might impact the modern workplace.

These papers are therefore an insight into how the UK Government sought to handle the growing health crisis from asbestos. Minutes and reports highlight these preparations, discussing details from factory visits to monitoring the asbestos dust. The guidance from the Asbestosis Research Council, alongside Sanders’ personal collection of research papers, show the studies that helped to shape the government’s actions. Sanders also kept a record of media coverage, showing how the industry coped with these regulations in the following decades.

1898 - The alarm is sounded by the female factory inspectors, warning of the ‘evil effects’ of asbestos

1931 – The first regulations on asbestos are introduced, but insurance only covers less than a quarter of workers

1974 – The Health & Safety at Work Act is passed, obliging T&N to guarantee safe working conditions and warn their customers of dangers

1976 – Nancy Tait becomes a thorn in T&N’s side after the publication of her informational pamphlet, Asbestos Kills, as well as her intervention in legal cases

1977 – Litigation from the USA against the asbestos industry had risen over time, with personal injury claims against T&N forcing the company to abide by court orders to archive its documents

1978 – Following a PR campaign by T&N, Nancy Tait goes on to found SPAID, the first asbestos action group in the UK

1979 – Alan Dalton publishes a book, Asbestos Killer Dust, where his attacks upon the TUC’s medical advisor for their pro-industry leanings lead to Dr. Murray suing him in a libel case

1982 - The broadcast of Alice: A Fight for Life exposed how T&N had gone out of their way to mislead workers, unions, and the government alike

1995 – Although Chase ultimately lost their case, the documents they uncovered are invaluable in helping people such as June Hancock prove T&N’s negligence in a highly publicised legal battle

2001 – T&N comes to an end as they go into administration after failing to cope with rising asbestos compensation costs – although they are no longer around, asbestos still kills

Blog posts about the asbestos collections